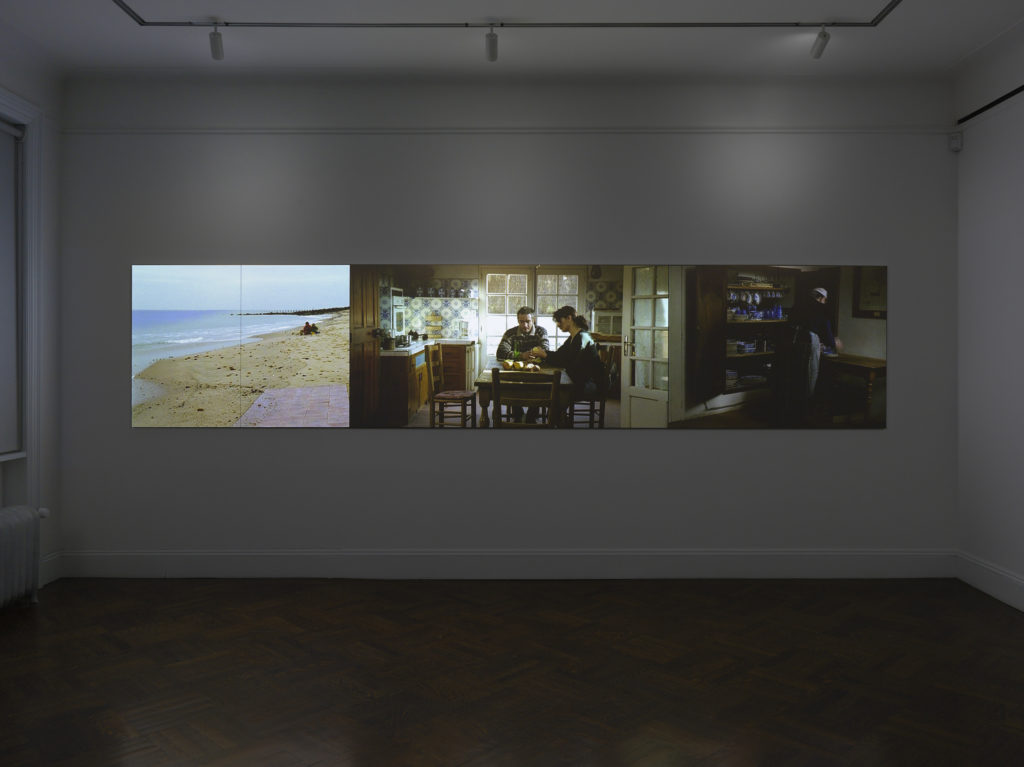 Blum & Poe is pleased to present an exhibition of video installation, photography, and sculpture by film luminary Agnès Varda. Hailed as the mother of the French New Wave with a career spanning over six decades, Varda shifted the focus of her practice in 2003 and in her own words, transformed from an “old filmmaker to a young visual artist.” The exhibition, Vardaʼs first in New York City, highlights works made from 1949 to the present, a rare amalgam of various epochs of the prolific artist’s lifetime. In Paris in 1954, Varda staged her first exhibition — on the courtyard walls and shutters of the house in which she still lives and works today — eighteen black & white photographs, stylistic precursors to her unprecedented works of film to come. This historic presentation of mounted, unique vintage prints is restaged here, sixty-three years later. Calder et sa famille (1954) presents Alexander Calder, his wife and daughters on a park bench in 1950s Paris — close friends of Varda at the time.
In Nus dans les ruines (1954), two bare male figures explore the fractured structure of a  derelict house, their pearly bodies emerging from the charcoal tones of aged wood and stone.
With Ulysse (1954), a man and child stand naked by a shoreline foregrounded by the soaked corpse of a goat. The man stares towards the ocean, the boyʻs gaze rests on the animal’s body – three forms suggesting a hidden narrative or mystery. While this first room of photography offers a testimony of the artist’s beginnings, the following galleries introduce a new chapter of her oeuvre, with contemporary sculpture and installation works.
Le Triptyque de Noirmoutier (2005) is a three-channel video featuring a central projection of a domestic kitchen scene, a homage to Baroque Flemish painting. This interactive work includes hinged screens, allowing the viewer to open and close side panels and influence the unfolding narrative. In another recent work, Bord de mer (2009), Varda proposes three representations and distinct dimensions of time portrayal. In still image, a view of the vast ocean expands before the viewer; in moving image, the end of a wave rolls and dissolves into the shoreline; and in the enveloping experience of installation, a small beach of sand edges towards the viewerʼs feet. As French cinematographer Julia Fabry puts it: “time passed, time permanent, and time present.”In the upstairs galleries, the viewer encounters a group of new works by the artist, a series entitled Cabanes de cinema (Shacks of cinema). The four sculptures in this collection are maquettes —  miniatures of the past and future ten-foot-high “shacks” inspired by Vardaʼs films from the 1950s-80s. Varda constructs these structures from recycled materials from their film counterparts. She uses 35mm film composite prints to build the walls of these shacks and Super 8mm film stock for the maquettes, an act that resuscitates scenes long locked in celluloid. In this way, Vardaʼs thematic investigations weave through her bodies of work, traversing time and mediums.In another room, Varda presents La terrasse du Corbusier, Marseille (1956) / Les gens de la terrasse (2008). A double image: a photograph with five figures and a baby on the Le Corbusierʼs terrace, juxtaposed with a video re-enactment of what might have preceded this very moment.Exhibition organizer Olivier Renaud-Clément notes: “What has struck me in meeting and working with Agnes is her vivacity and voracity for life and time — a notion fully explored in her films and a curiosity ever re-awoken. Probably in this exhibition, Les gens de la terrasse seems to best synthesize the nature of her work; this notion of time passing, the moment immortalized, and the eternal importance of the before and after … the mystery of continuity and stories told.”The exhibition is complete with a trinity of self-portraits, captured respectively at ages twenty-one, thirty-four, and eighty-one — works from the past culled together, in a selfreflexive exercise that explores the permanence of image and the ephemerality of life.On the occasion of the exhibition, Blum & Poe will partner with the French Institute Alliance Française and Rendez-Vouz with French Cinema of the Film Society, Lincoln Center to present a series of Varda’s cinematic works and lectures. On Tuesday, February 28, 7:30pm, hosted at the French Institute Alliance Française, Varda will discuss her practice as a visual artist and the work on view at Blum & Poe. This talk will be moderated by Olivier Renaud-Clément. A full list of film programming is available on the exhibition webpage.